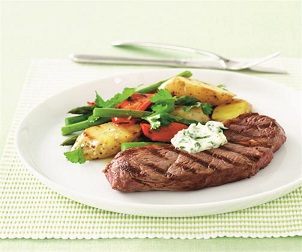 Don't crowd the flat-plate or char-grill plate when you barbecue.  This reduces the heat and the meat will then release juices and begin to stew.

Always rest meat after it comes off the heat. This allows the juices, which have been driven to the centre of the meat by the heat to return to the surface.  If given the time to rest, the meat will loose less juice when you cut it and will be juicier and tastier.

POTATO SALAD:  Cook potatoes until just tender, and then thickly slice.  Drizzle with a little of the oil and season with salt and pepper.  Brush the capsicum with half the remaining oil.  Cook on grill for 2 minutes each side or until tender.  Transfer to a heatproof bowl.  Drizzle the asparagus with remaining olive oil.  Cook on grill for two minutes each side or until bright green and tender crisp.  Place the potato, capsicum, asparagus and parsley in a large bowl.  Drizzle with lemon juice and extra olive oil, and gently toss to combine.

GARLIC MAYONNASE:  Combine the mayonnaise, garlic and coriander and serve.

Rainbow Meats is excited to be getting back to our normal business practices – which includes seeing our valued customers in person again! Its been a challenging time for many, and we are pleased that we were able to add the additional service of home deliveries during the lockdown.

However, now that retail is back operating without restrictions, we are now reverting to our normal service, which is face-to-face in-store shopping, or of course our ‘click and collect’ service. Home Deliveries will be discontinued from the 30TH Oct 2020.

Visit in-store 7 days a week or take advantage of our ‘click and collect’ shopping, available here on our website.

Ordering has never been easier

CONTINUE SHOPPING If you don't have a loyalty card, talk to us when picking up your order.